The Fondation Louis Vuitton is to dedicate an exceptional evening to a monument of the classical repertoire: the six Sonatas and Partitas of J.S.Bach. Tedi Papavrami will play these complete works in two halves:

6-7 pm: performance with artist's comments of Sonata No. 2 and Partita No. 1

Tedi Papavrami will play the Stradivarius Reynier lent to him by LVMH.

"In the communist Albania of my youth, Bach was lucky enough to escape censorship. Or to be more precise, it was his purely instrumental music that was spared. We had Bach without the Passions, Cantatas, Chorales or Masses. As for organs – there were none in the country.

However, even stripped of his religious dimension, Bach gave us plenty of food for thought. The invisible weight of his oeuvre was there – albeit unacknowledged by the regime: an immense unfathomable sea, keeping us nourished, and profoundly so, via a violin concerto movement here or a Sicilienne or prelude for solo violin there. I felt this presence even as a child, without ever being able to put my finger on it. To my mind, an ineffable and never-ending charm seemed to suffuse the pages of the Sonatas and Partitas, which I began to play at the age of eight. Little did I know back then that this music would accompany my entire life, providing comfort, unity and a homeland in a daily reality that was soon to be stripped of these qualities. What I was unaware of at the time, and for long time thereafter, was the spiritual journey charted by this series of six Sonatas and Partitas for solo violin. While Bach was certainly a man of faith, he was too subtle and too human to deliver a pre-packaged spiritual message, even if he believed in it. As in the Confessions of St Augustine, this music transports us through all the stages of the passions, fascinations and grievances of humanity, before ultimately attaining a state of constant bliss. The label we attach to this – religious, spiritual or philosophical – hardly matters. From the days of Antiquity to the present, from India to the West, this same journey has been tirelessly mapped out by men of rare distinction. While we cannot be sure that composers such as Bach or Beethoven reached these supreme levels of fulfilment in their daily lives, it is certain that they attained such heights in their art. Today we are lucky enough to be able to short-circuit the time and effort required to take them in. We can listen in to a specific work and thus access the serenity offered by these fleeting moments of virtue, captured by men of genius". Tedi Papavrami, October 2014

Arriving in France a tender age, Tedi Papavrami found himself facing a wholly alien land and culture. Naturally inquisitive, his determination to feel more at home in his new country, and to overcome his initial sense of isolation by mastering the French language, urged him to devour countless books — all in French — by writers such as Stendhal, Proust, Flaubert, Dostoyevsky, Kafka, etc.

A truly exceptional musician, Papavrami is characterised by a curiosity that knows no borders, coupled to great intellectual and artistic rigor: together these qualities have enabled him to bridge the gap between his background and less familiar horizons.

Following the death of the Albanian translator Jusuf Vrioni, in 2000 he took up the mantle of translating the works of author Ismail Kadare. This foray into the literary sphere continued in 2013 with Fugue pour Violon Seul, published by Robert Laffont. Unanimously hailed by the Press, Tedi’s autobiographical narrative recounts his past as a child prodigy in Albania, followed by his flight to the West and to freedom.

Introduced to the instrument that has since formed an integral part of his existence at the age of five by his father, a brilliant teacher, Tedi’s progress was sensational. Just three years after taking up the violin, he was playing a concert of Sarasate’s Gypsy Airs with the Tirana Philharmonic Orchestra. At eleven, he gave a public performance of Paganini’s Concerto no. 1, complete with Emile Sauret’s nerve-jangling cadenza.

Invited to Paris, the young virtuoso became a student of Pierre Amoyal’s at the Conservatoire National Supérieur de Paris. In addition to many concerts, at this period he made occasional appearances in TV programmes, such as ‘Le Grand Echiquier’.

In the wake of a slew of prizes, in the 1990s Tedi started carving out a career as a soloist and chamber musician, collaborating as a soloist with orchestral conductors of the stature of Kurt Sanderling, Antonio Pappano, Armin Jordan, Emmanuel Krivine, Manfred Honeck, François-Xavier Roth, Thierry Fischer, Gilbert Varga, and Matthias Aeschenbacher…

On the chamber music side, he was a member of the Quatuor Schumann, a piano quartet, for nine years. In concert he appears with partners of the calibre of Philippe Bianconi, Nelson Goerner, Maria João Pires, Martha Argerich, Gary Hoffman, Marc Coppey, Paul Meyer, and Lawrence Power.

Since 2011, he has been working on Beethoven’s violin sonatas and piano trios together with cellist Xavier Phillips and pianist François Frédéric Guy, musicians with whom he appears on a regular basis.

Presently residing in Geneva, Switzerland, Tedi has been teaching violin at the H.E.M. since September 2008. He plays on a 1727 Stradivarius, the Reynier, lent him by the Louis Vuitton Moët Hennessy group.

In 2014, Tedi Papavrami was awarded the year’s ‘Solo Instrumentalist’ Diapason d’Or and a Choc Classica 2014 for a disc devoted to works for violin alone by Eugène Ysaÿe. 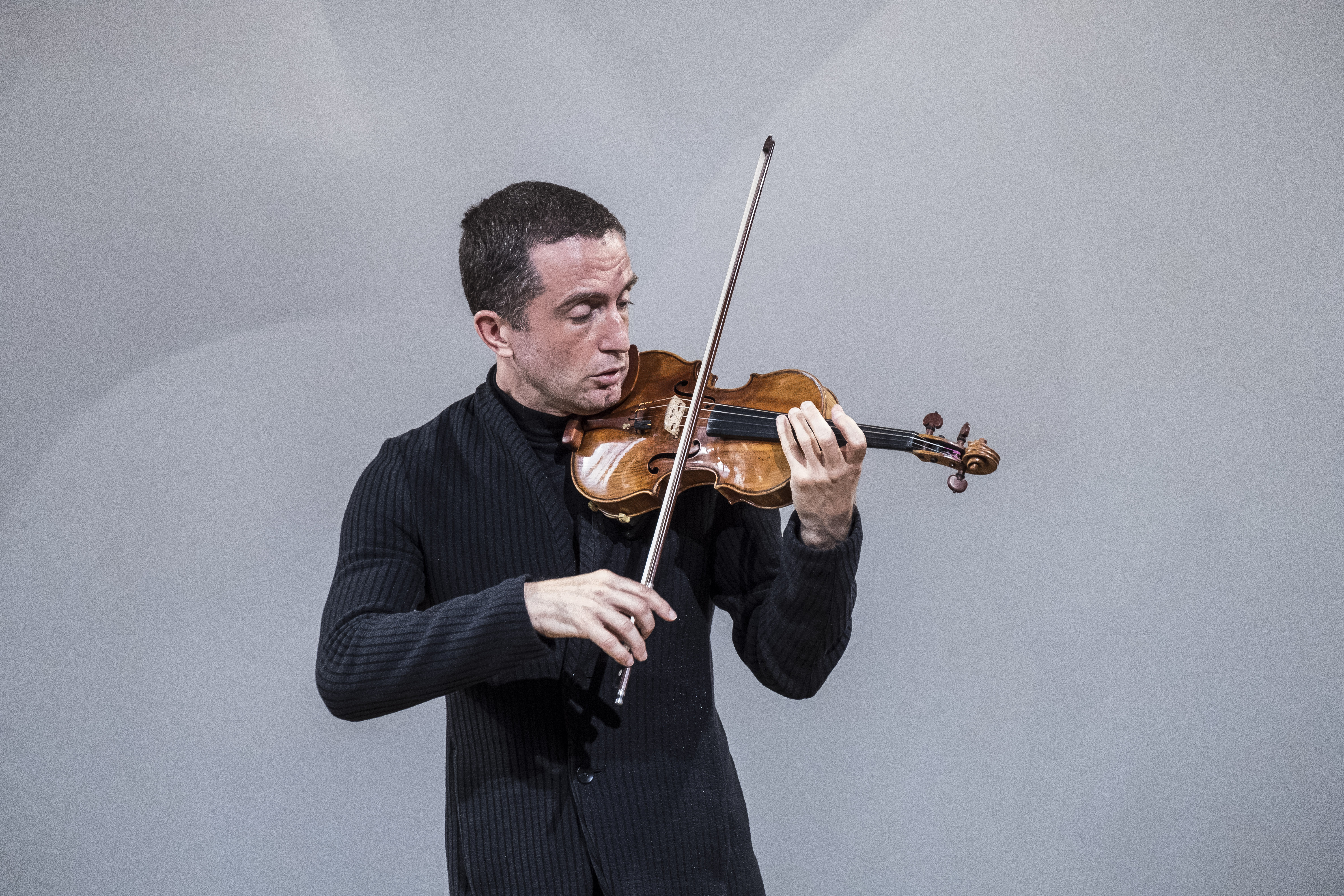