British-born Thomas Adès is one of the most acclaimed musicians of his generation, both in terms of his talent as a pianist and as a composer. Here, he performs a programme with the Finnish violinist Pekka Kuusisto based on repertoire for violin and piano from the 20th and 21st centuries. In fact, alongside the works of Ravel and the recently deceased Briton Oliver Knussen, Thomas Adès performs the world premiere of his Sonata for piano and violin, which was commissioned by the Fondation Louis Vuitton.

After an unforgettable concert dedicated to Leoš Janáček in 2018, Thomas Adès returns to the stage of the Fondation Louis Vuitton Auditorium for a remarkable event. Alongside the Finnish violinist Pekka Kuusisto, he demonstrates his talent both as pianist and composer, interpreting the piano and violin sonata that he composed on request by the Fondation in a world première. 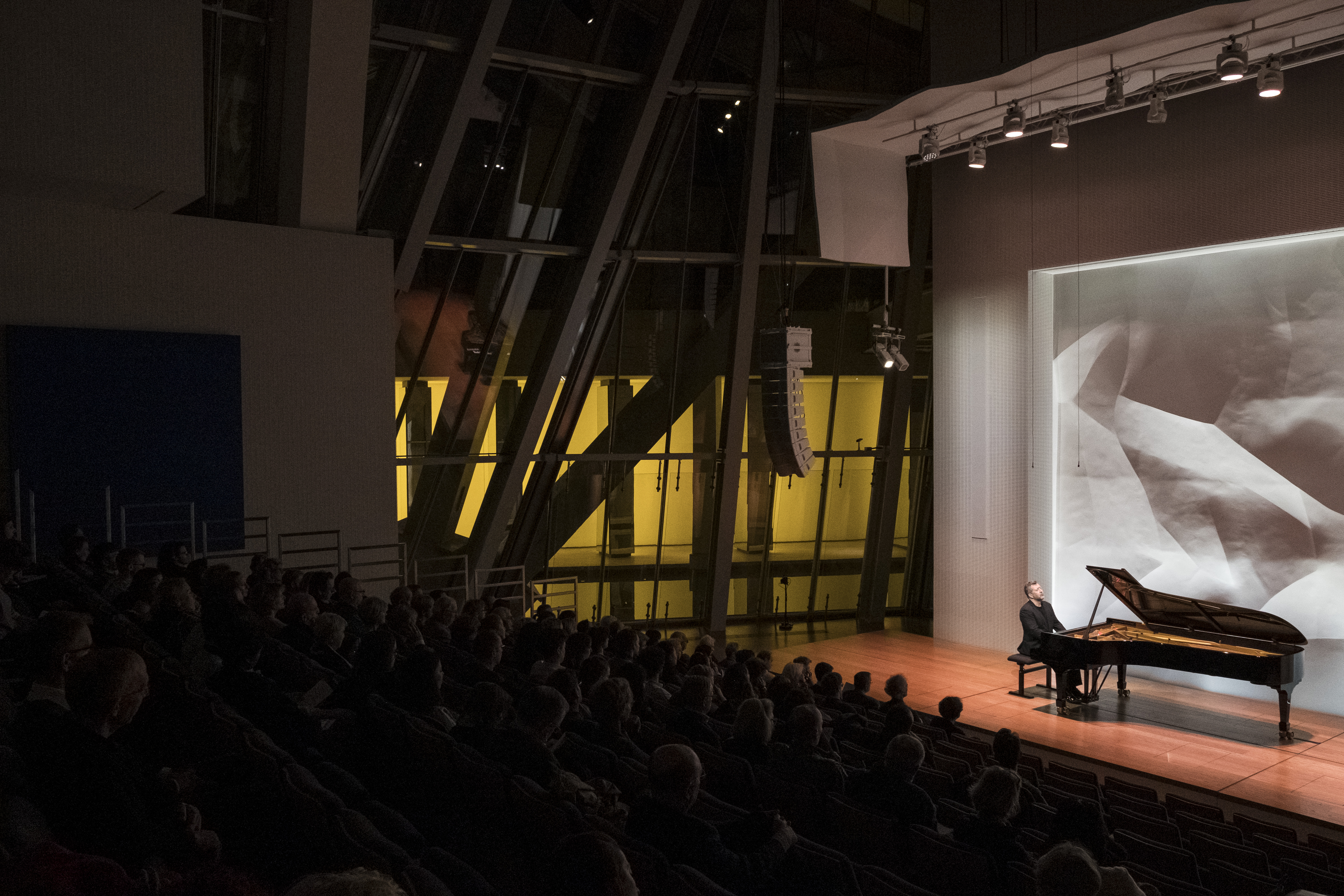 A renowned pianist, accomplished orchestra conductor and one of the most gifted composers of his generation, Thomas Adès is a major figure in contemporary music. Far from any outdated tablula rasa, his aesthetic hinges upon the musical past, of which it is an extension, pursual, or – on the contrary – refutation, in a logic that remains eminently individual. As the musicologist Hélène Cao duly notes, Thomas Adès’ music owes some of its accessibility to the assertive way he references the great classic works and also more popular repertoires through approaches ranging from literal to camouflaged, from the direct excerpt to the discreet allusion. His music is striking because it is undeniably subtle, but also because it is fun. His superbly refined rhythmic system, translating a masterfully phrased rubato, mingles with free-form jazz evocations. His harmony – developed through an elaborate modal concept – is always exquisitely sparkling, emphasizing his orchestral skill. The composer also cultivates a taste for writing music for an ensemble through the process of transcription, a prism through which he provides a renewed interpretation of his own music and of the composers that inspire him.

With Powder Her Face (1994), The Tempest (2004) and The Exterminating Angel (2016), Thomas Adès asserts a taste for the opera. This explains his recurring use of extra-musical inspirations – namely literary or pictorial – which also mark his instrumental music.

The piano and violin both play preponderant roles in his repertoire: they are the only instruments for which he has composed concertos (the violin concerto “Concentric Path,” 2005 and the Concerto for piano and orchestra, 2018). Moreover, he also adopted a duet configuration for Lieux retrouvés (2009, for cello and piano). With this latest creation, which he himself performs alongside his talented musical partner Pekka Kuusisto, Thomas Adès invites us to discover a new opus of an orchestral universe that he particularly appreciates, held up to that of his admired forbearers through a subtle game of mirrors.

This concert will be available on streaming on Radio Classique, on demand and streaming on medici.tv, on replay on Mezzo as well as a live broadcast and a replay on the website of the Fondation.

Thomas Adès was born in London in 1971. Renowned as both composer and performer, he works regularly with the world’s leading orchestras, opera companies and festivals.

His compositions include three operas: the most recent of which The Exterminating Angel premiered at the 2016 Salzburg Festival and subsequently has been performed at the Metropolitan Opera, New York and the Royal Opera House, London all conducted by the composer; The Tempest (Royal Opera House and Metropolitan Opera); and Powder Her Face. His orchestral works include Asyla (CBSO, 1997), Tevot (Berlin Philharmonic and Carnegie Hall, 2007), Polaris (New World Symphony, Miami 2011), Violin Concerto Concentric Paths (Berliner Festspiele and the BBC Proms, 2005), In Seven Days (Piano concerto with moving image - LA Philharmonic and RFH London 2008), Totentanz for mezzo-soprano, baritone, and orchestra (BBC Proms, 2013), and Concerto for Piano and Orchestra (Boston Symphony Orchestra, 2019). His compositions also include numerous celebrated chamber and solo works.

Thomas Adès has been an Artistic Partner of the Boston Symphony Orchestra since 2016 and conducts the orchestra in Boston and at Tanglewood, performs chamber music with the orchestra players, and leads the summer Festival of Contemporary Music. He also regularly coaches Piano and Chamber Music at the International Musicians Seminar, Prussia Cove.

As a conductor, Thomas appears regularly with the Los Angeles, San Francisco and London Philharmonic orchestras, the Boston, London, BBC, Finnish Radio and City of Birmingham, Symphony Orchestras, the Royal Concertgebouworkest, Leipzig Gewandhaus and the Orchestra of Santa Cecilia. In opera, in addition to The Exterminating Angel, he has conducted The Rake’s Progress at the Royal Opera House and the Zürich Opera, The Tempest iat the Metropolitan Opera and Vienna State Opera, and Gerald Barry’s latest opera Alice’s Adventures Under Ground in Los Angeles (world premiere) and in London (European premiere). In the 2020-21 season Thomas is a featured composer at the Elbphilharmonie and will conduct the NDR Elbphilharmonie Orchestra and Deustche Kammerphilharmonie Bremen in Europe. To celebrate his fiftieth birthday in 2021, he returns to conduct the Britten Sinfonia at the Barbican Centre in a concert of his own music, Beethoven, Stravinsky and Janacek.

His piano engagements have included solo recitals at Carnegie Hall (Stern Auditorium), New York and the Wigmore Hall in London, and concerto appearances with the New York Philharmonic and Boston Symphony Orchestra. Recent piano releases include an album solo piano music by Janáček and a live album of Winterreise s with Ian Bostridge.

His many awards include the Grawemeyer Award for Asyla (1999); Royal Philharmonic Society large-scale composition awards for Asyla, The Tempest and Tevot; and Ernst von Siemens Composers' prize for Arcadiana; British Composer Award for The Four Quarters. His CD recording of The Tempest from the Royal Opera House (EMI) won the Contemporary category of the 2010 Gramophone Awards; his DVD of the production from the Metropolitan Opera was awarded the Diapason d'Or de l'année (2013), Best Opera recording (2014 Grammy Awards) and Music DVD Recording of the Year (2014 ECHO Klassik Awards); and The Exterminating Angel cwon the World Premiere of the Year at the International Opera Awards (2017). In 2015 he was awarded the prestigious Léonie Sonning Music Prize and in January 2021 he judged the Toru Takemitsu composition award. 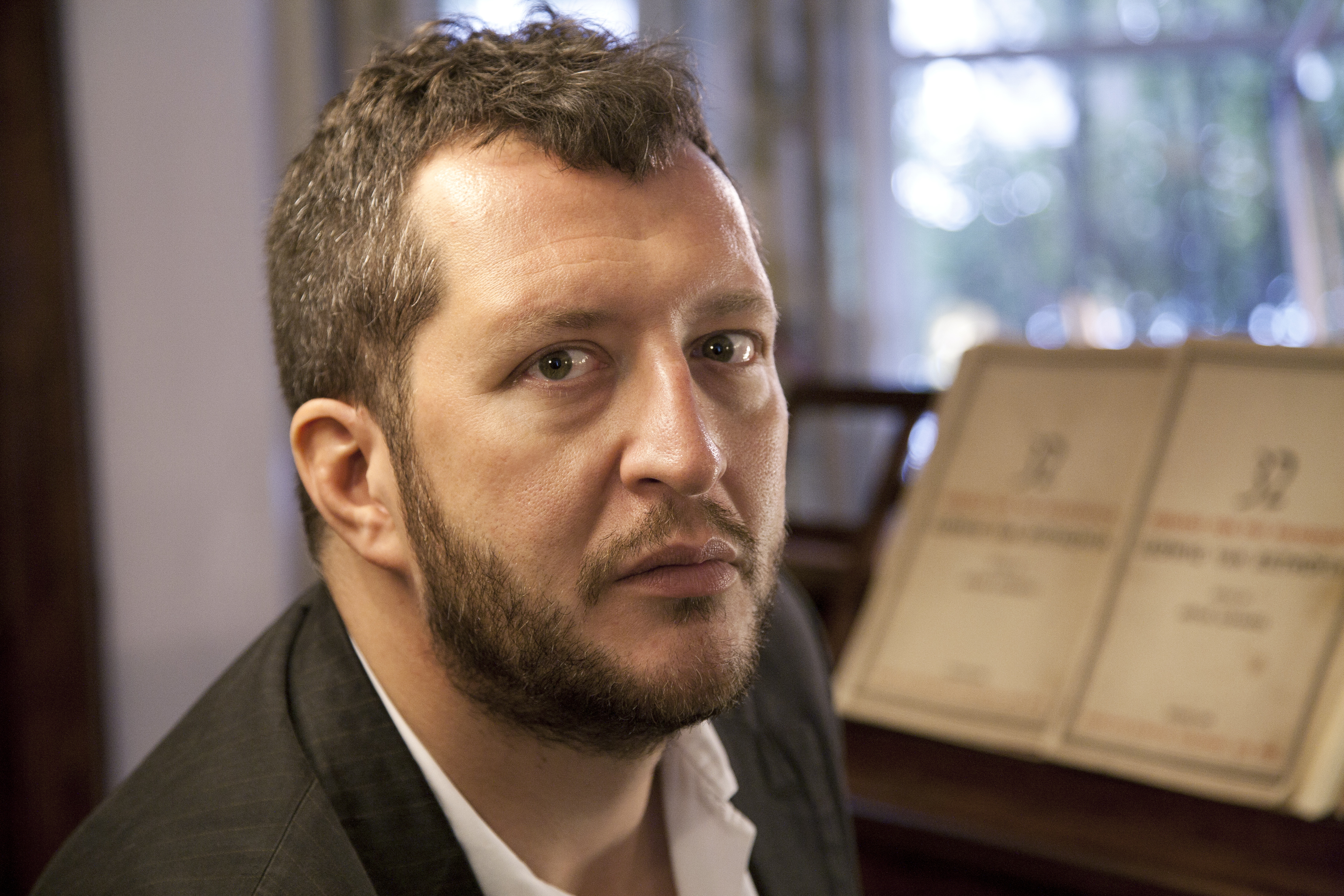 He is also a Collaborative Partner of the San Francisco Symphony, and Artistic Best Friend of Die Deutsche Kammerphilharmonie Bremen. In season 20/21 Pekka Kuusisto is Artist in Residence with the hr-Sinfonieorchester Frankfurt with whom he will appear as soloist, conductor and chamber musician. He is also In-Residence at Milton Court at the Barbican, which culminates in a concert with the Norwegian Chamber Orchestra.

Kuusisto has released several recordings, notably for Ondine and BIS. He has recently recorded Ades’ Violin Concerto with Aurora and Nicolas Collon for Deutsche Grammophon, Hillborg’s Bach Materia and Bach’s Brandenburg Concertos Nos.3 and 4 with the Swedish Chamber Orchestra and Thomas Dausgaard for BIS and Daniel Bjarnason’s Violin Concerto with the Iceland Symphony Orchestra with the composer conducting for Sono Luminus. Past releases include Erkki-Sven Tüür’s Noesis concerto for violin and orchestra for Ondine and Sebastian Fagerlund’s violin concerto Darkness in Light for BIS, both recorded with Finnish Radio Symphony Orchestra and Hannu Lintu. 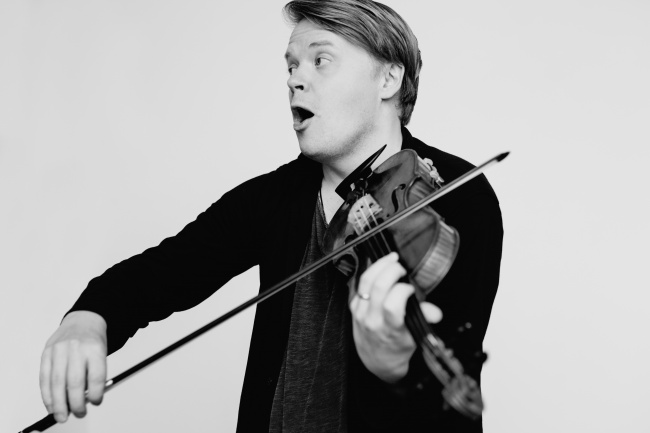