At just 17 years old, Yoav Levanon is already showing extraordinary maturity and sensitivity to music. He began his dazzling career at an early age, playing on the world’s most prestigious stages and alongside its finest performers.

This programme offers a panorama of the diverse romantic piano repertoire: the majestic precision of Mendelssohn’s Variations sérieuses with the contrasting atmospheres of Fantaisie, op. 17, by Schumann, through to Liszt’s monumental Sonata in B minor. The recital will then leave behind the pathos of romanticism to celebrate the colourful harmonies and irresistible swing of George Gershwin’s famous Rhapsody in Blue.

Having started his professional piano education at the age of 3, Yoav Levanon, 17, has an impressive career of performances, winning competitions, receiving prestigious awards, creative excellence grants and playing with orchestras around the world.

At the beginning of 2021, Yoav took part in a filmed project with maestro Daniel Barenboim. Later during the year, he is invited to play on some of the most prestigious stages in France, Germany, Israel, Lithuania and Switzerland. Yoav will perform in the Louis Vuitton Auditorium and Radio France Grand Auditorium, Paris, France, and with the “Orchestre de la Swiss Romande” at the Victoria Hall, Geneve, Swiss, among others.

2020 started with a Solo Recital performance in a “Piano Summit” with Martha Argerich at Schloss Elmau, Germany. Later during the year Yoav performed at the Piano Jacobins Festival in Toulouse. In 2019, Yoav appeared as the youngest pianist in festival history at the renowned Swiss Verbier Festival and was celebrated as a "discovery". His debut Solo Recital, broadcast globally on medici.tv, gained the largest online audience of any of the 2019 Festival’s events.

Soon after, Yoav took part in the Tsinandali Festival, Georgia, where he played Mozart and Bach Concertos for Two Pianos and Orchestra with acclaimed pianist Sergei Babayan. During the same year, 2019, Yoav received “Young Talent Award” of the “Excelentia Foundation” and performed in a ceremony at the National Auditorium Madrid with the presence of her majesty Queen Dona Sofia. Later on, he made his orchestral debut in Spain on the same stage performing Tchaikovsky concerto No1. with Santa Cecilia Classic Orchestra.

During the year 2018, Yoav, then 13, performed the Rachmaninoff Piano Concerto no.2 with the Israeli Philharmonic Orchestra in concerts titled “First Prize – the best young pianists in the music world”. Later during the year he participated in the Verbier Festival Academy, Swiss, performed a solo recital at the Verdi Theatre, Italy, and took part at the Verbier Festival at Schloss Elmau, Germany, performing a solo recital and participating in a chamber music concert. Yoav was named as one of 10 extraordinary Israelis under the age of 16 who have “accomplished by the age of (less then) 16 more than many of us do in a life time”.

Being only 11 years old, Yoav performed the Chopin Piano Concerto no.1 on the prestigious San Carlo Theatre stage under the direction of the well-reputed maestro Daniel Oren. In a breathtaking performance, Yoav won the audience excitement by his delicate Chopin interpretations, with an astounding variety of timbre and fluent virtuosity.

At 10, Yoav became the First Prize winner of the Pnina Salzman Piano Competition and “Piano Forever” piano competition. At the age of 9, Yoav performed the Beethoven's First Piano Concerto with the Raanana Symphonette Orchestra and received the Sharett Creative Excellence Grant from the America-Israel Cultural Foundation.

When Yoav was 8, he opened the “International Summer Jewish Festival” performing with the Franz Liszt Chamber Orchestra.

Yoav appears on stage from the age of 4, at 5 he became a winner of his first National Piano Competition in Israel. At 6, Yoav won his first Gold Medal at an International Piano Competition in the USA and performed on the prestigious stage of the Carnegie Hall in New York. He made his orchestral debut with Israel Chamber Orchestra at the age of 7.

Yoav is guided by top piano professors and musicians in Israel and abroad and he is privileged to take part in the ‘Piano Program for outstanding young pianists’ at the Jerusalem Music Center, directed by the distinguished American concert pianist and conductor, Murray Perahia. 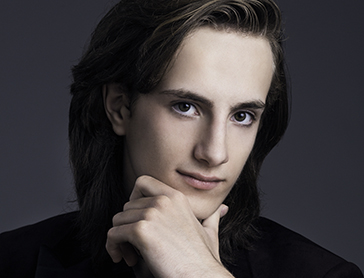